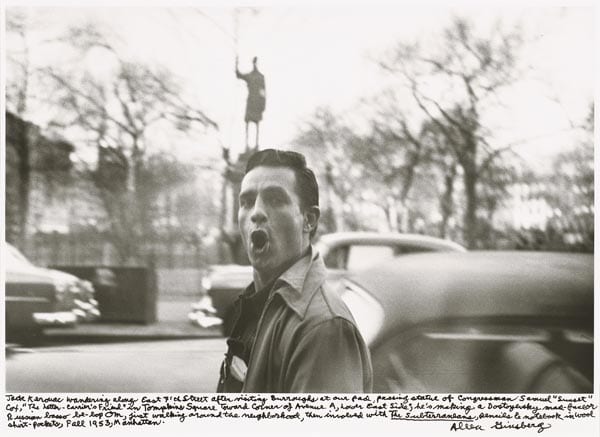 Inspired by Ginsberg’s collection of candid photographs with eccentric handwritten captions about his cohort of beat writers, lovers, and artists, Qcc and CJM invited 6 bay area artists and scholars to create a live performance event in the gallery. During this unique exhibition tour, performers will present their artistic and literary encounters with the legendary Allen Ginsberg.  Artists and scholars include: Richard Meyer, Tirza Latimer, Justin Chinn, Jaime Cortez, Kim Anno, Jewelle Gomez and DL Alvarez.

Jaime Cortez is an artist, writer and cultural worker based in Oakland, CA. He was raised between Mexicali, Baja California and Watsonville, Alta California. His visual art has been exhibited at numerous venues including the Oakland Museum of California, Huntington Beach Center for the Arts and in San Francisco art spaces including Southern Exposure, The Lab, Intersection for the Arts and Galería de la Raza. Jaime attended the University of Pennsylvania and is pursuing an MFA in visual arts at the UC Berkeley. He has also performed at Theater Rhinoceros, Josie’s Cabaret, the Cell, the SomArts Gallery, the Grasshopper Palace, the CoCo Club, Brava Theater, the Glaxa Theater and Club Axis in Los Angeles. Jaime’s writing has been anthologized in numerous collections including Besame Mucho, 2sexE and Queer PAPI Porn. He has edited an anthology entitled Virgins, Guerrillas & Locas for Cleis Press (1999). He is the author of a graphic novel, Sexile (Los Angeles: 2004). Jaime has been a public high school teacher abroad (Japan), and an AIDS educator.

Justin Chinn was born in Malaysia, raised & educated in Singapore, shipped to the U.S. by way of Hawaii, and now living in San Francisco. Author of 3 books of poetry, all published by Manic D Press: Bite Hard (1997); Harmless Medicine (2001), a finalist in the Bay Area Book Reviewers Association Awards; and, Gutted (2006), which received the 2007 Thom Gunn Award for Poetry by the Publishing Triangle. Squeezed in between these were 2 non-fictions: Mongrel: Essays, Diatribes & Pranks (St. Martins, 1999), and the ur-memoir, Burden of Ashes (Alyson Publications, 2002).

Kim Anno is a painter, photographer, and video artist whose work has been collected by museums nationally and shown internationally. Recently she has had exhibitions and screenings at the Goethe Institute, Johannesburg, Asian Art Museum, SF, Flux Projects, Atlanta, Context, Art Miami, Marcia Wood Gallery in Atlanta, Patricia Sweetow Gallery in San Francisco, Site Santa Fe Biennale:One Night Stand in New Mexico, the King’s Art Center, California (retrospective) the Varnosi Museum in Hungary, DC Dusseldorf International Expo (Germany), Pulse, Miami, and the Berkeley Art Museum, the Denison University Museum, Noel Art Museum, among others. Currently she is working with other artists collaboratively within an ensemble of video artists and composers called, Ice on the High; and a long term video work: Men and Women in Water Cities.

Jewelle Gomez is a writer and activist and the author of the double Lambda Award-winning novel, THE GILDA STORIES. Her adaptation of the book for the stage “Bones & Ash: a Gilda Story,” was performed by the Urban Bush Women company in 13 U.S. cities.  She is the recipient of a literature fellowship from the National Endowment for the Arts; two California Arts Council fellowships and an Individual Artist Commission from the San Francisco Arts Commission. Her fiction, essays, criticism and poetry have appeared in numerous periodicals. Among them: The San Francisco Chronicle, The New York Times, The Village Voice; Ms Magazine, ESSENCE Magazine, The Advocate, Callaloo and Black Scholar. Her work has appeared in such anthologies as Home Girls, Reading Black Reading Feminist, Dark Matter and the Oxford World Treasury Of Love Stories.

D-L ALVAREZ is a visual artist working in various mediums, including fiction. His drawings and films are in the collections of the SF and NY MoMA and the Whitney, and recently the Berkeley Art Museum honored him with his first museum solo-exhibition.