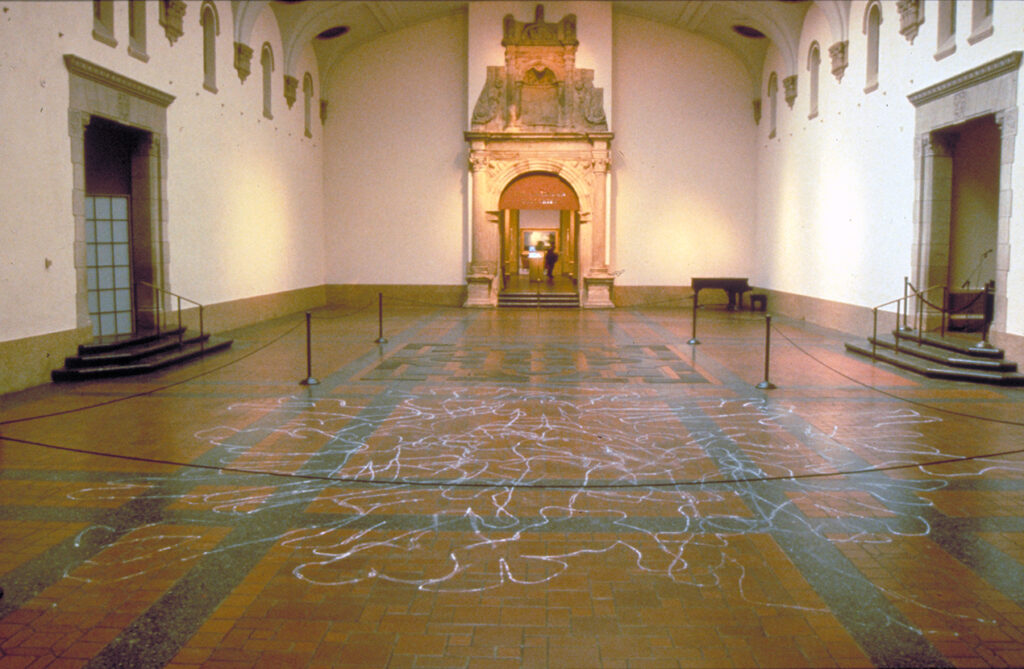 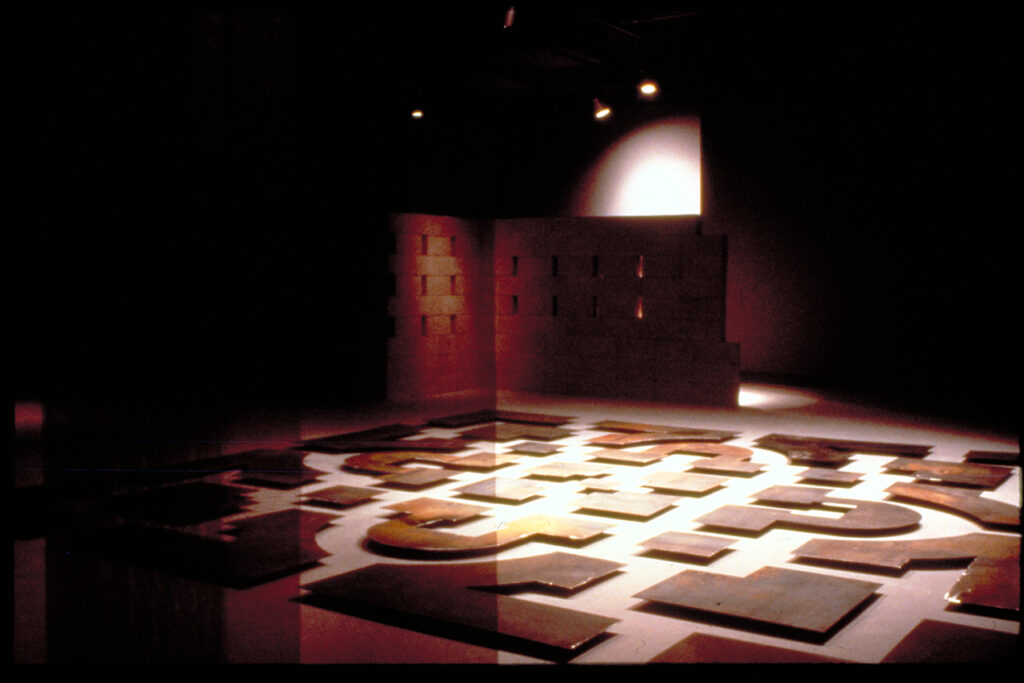 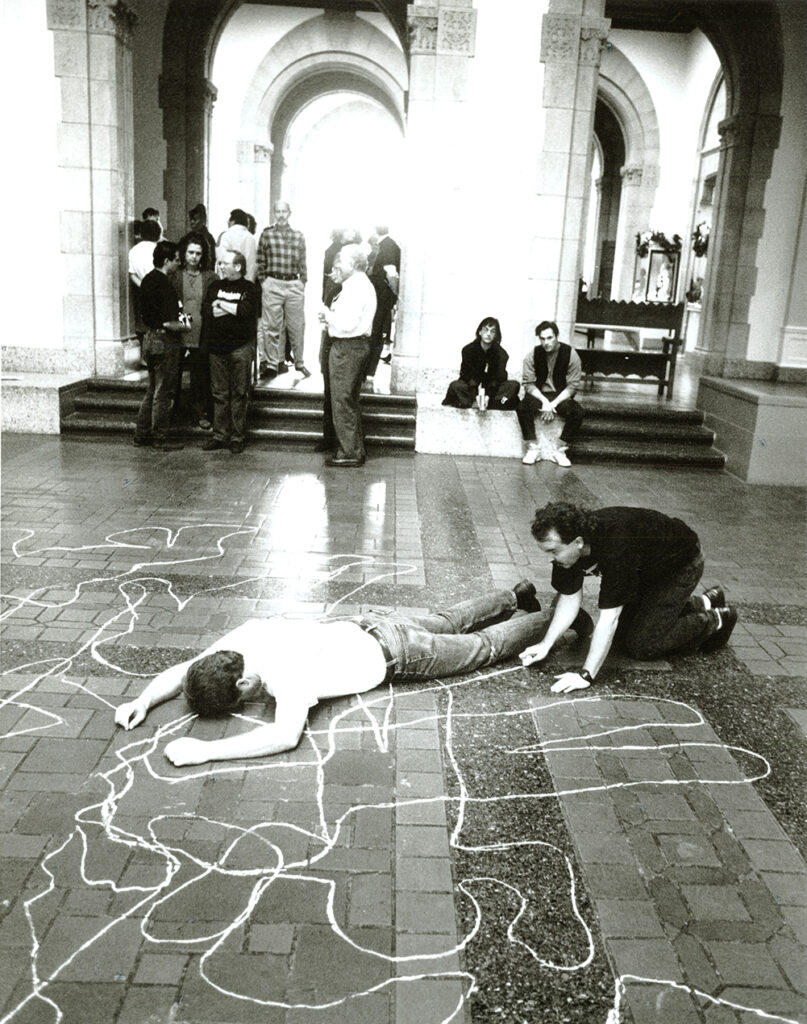 “Immemorial” was a performance/installation created at the De Young Museum as part of “A Day Without Art” events held throughout the United States on World AIDS Day, December 1, 1992.

On the morning of December 1st I carried in and positioned dozens of individual units that created a 17’x17’x1/8” steel garden (parterre) in the far end of the central courtyard of the Museum (Hearst Court). The staff, invited guests and the public watched from the entranceway. After positioning the steel garden, I invited audience members to lie down in the front area of the courtyard and allow me to trace the outlines of their bodies with white chalk. The image was that of a geometric steel garden in the background and a chaotic somewhat circular formation of chalked body tracings in the foreground. The installation remained on view throughout the day.

This element was recycled from an earlier installation done at the University of California, Davis in 1986 called “Il Danteum,” the name of a monument designed by Mussolini’s architect. This proposed building was modeled on Dante’s “Divine Comedy.” The building was intended to retrace for a public the sinners’ progress from this world to their final destination in the Great Hall of Paradise. There, merged with the symbol of the “Holy Spirit,” was the emblem of Mussolini.

I used the pattern of an Italian 17th century parterre to make in steel an imaginary garden for the court yard of this never realized building.

The garden was raised slightly from the ground. Under the garden were speakers on which were played a recording of a women incomprehensibly talking to herself. Above and surrounding the garden, recordings of men’s voices reading from the “Inferno” could be heard—the sound was layered and diffused in order to create an ambient effect.

The piece was a reflection on the use of religion and morality in a perverse political ideology. The dead garden, to me, was a fitting symbol of this abuse.

I used the steel garden, stripped of its earlier context, but still a loaded sign of elegance and power, in the De Young “Immemorial” performance/installation.

The performance that created the circle of chalked body traces was patterned after the political trope used by ACT-UP and other activist groups known as a “Die-In.” In an act of protest against governmental policies and social conditions that directly contributed to the deaths of men and women from AIDS, groups of demonstrators would lie in the middle of a designated space while other demonstrators traced their body outlines—usually in spray paint. The residue of this action would stay in the public space long after the event.

The image of the body outline is also appropriated (and subversively re-inscribed) from crime scene procedures used by the police.

The title of the piece comes from a term used by the philosopher François Lyotard. It refers to that which can neither be remembered (fully brought to consciousness) nor forgotten (consigned to oblivion).

It calls to us to speak of an historical event such as the AIDS epidemic (Lyotard himself uses the historical example of Auschwitz) as an event in history rather than the object of history, so that its singularity is neither lost in historical representation nor does it become something that happened, among other things. It calls forth the task of “not forgetting”—and calls for us to keep this event from sinking into oblivion as the silent object of history.

As Lyotard puts it in “Heidegger et ‘les Juifs’”:

“What really preoccupies us, whether historians or non-historians, is this ‘past’ which is not over, which doesn’t haunt the present in the sense that it is lacking, missing. It neither occupies the present as a solid reality nor haunts the present in the sense that it might indicate itself even as an absence, a specter. This ‘past’ is not an object of memory in the sense of something which may have been forgotten. The ‘past’ is therefore not even there as a blank, an absence, terra incognita, but it is still there.” – Bill Reading, Introducing Lyotard: Art and Politics, 1991

A Day Without Art

“A Day Without Art” was created as a way of bringing AIDS awareness to the art world. In its first manifestation (1987), museums and galleries were asked to close or darken rooms to remember artists who had died of AIDS and to bring awareness of how the global crisis of the AIDS epidemic had impacted the arts. In following years, many artists around the country started creating performances, exhibitions, events and unique works of art to address the issues of AIDS on this day—thus silent memorials were turned into pro-active events.

Some images and press 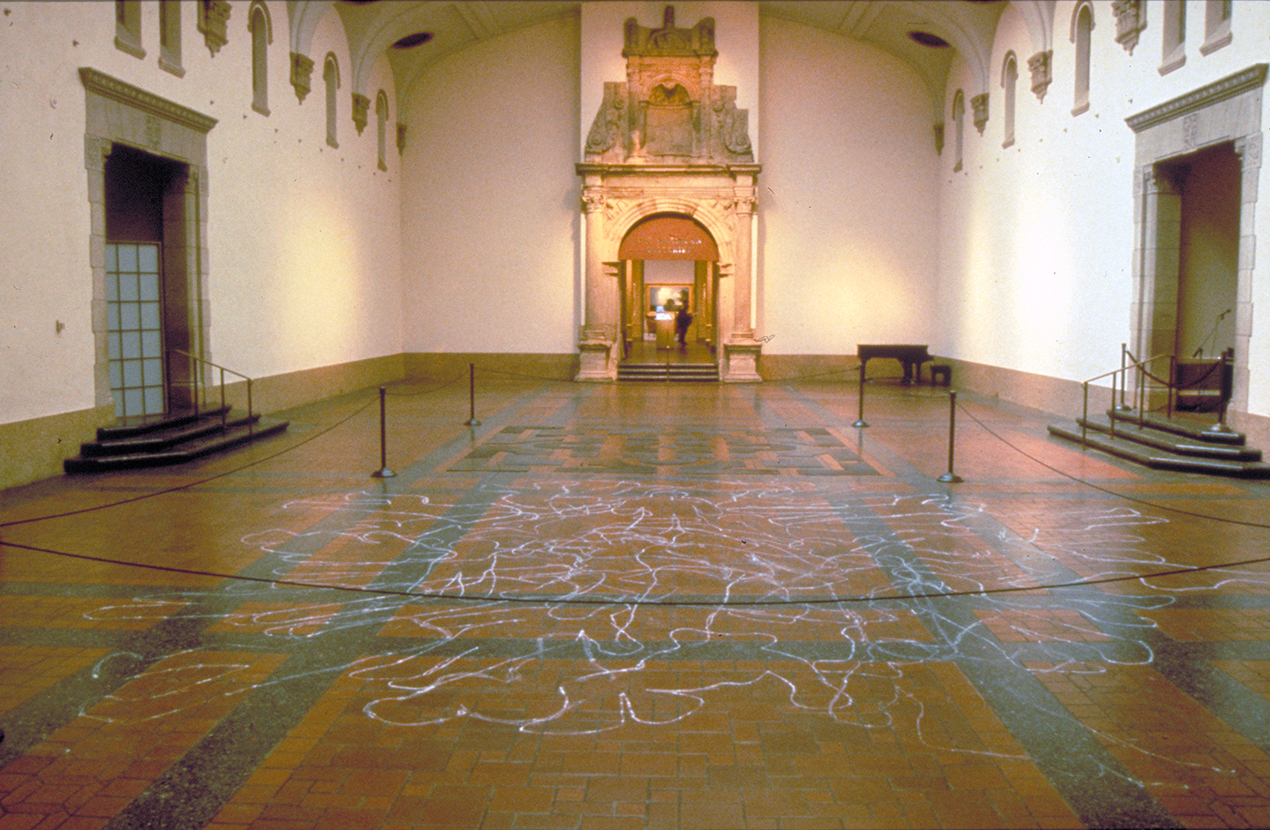 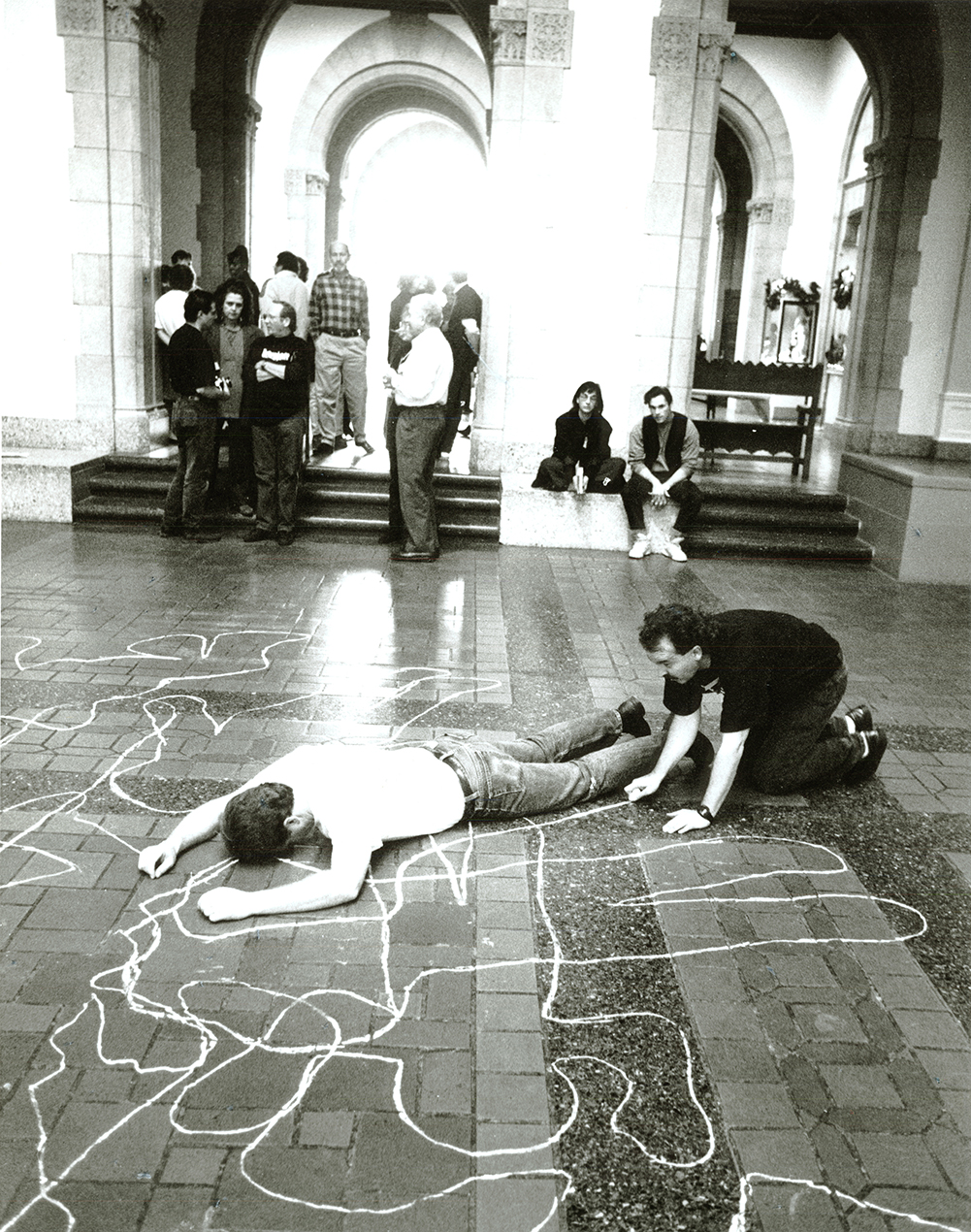 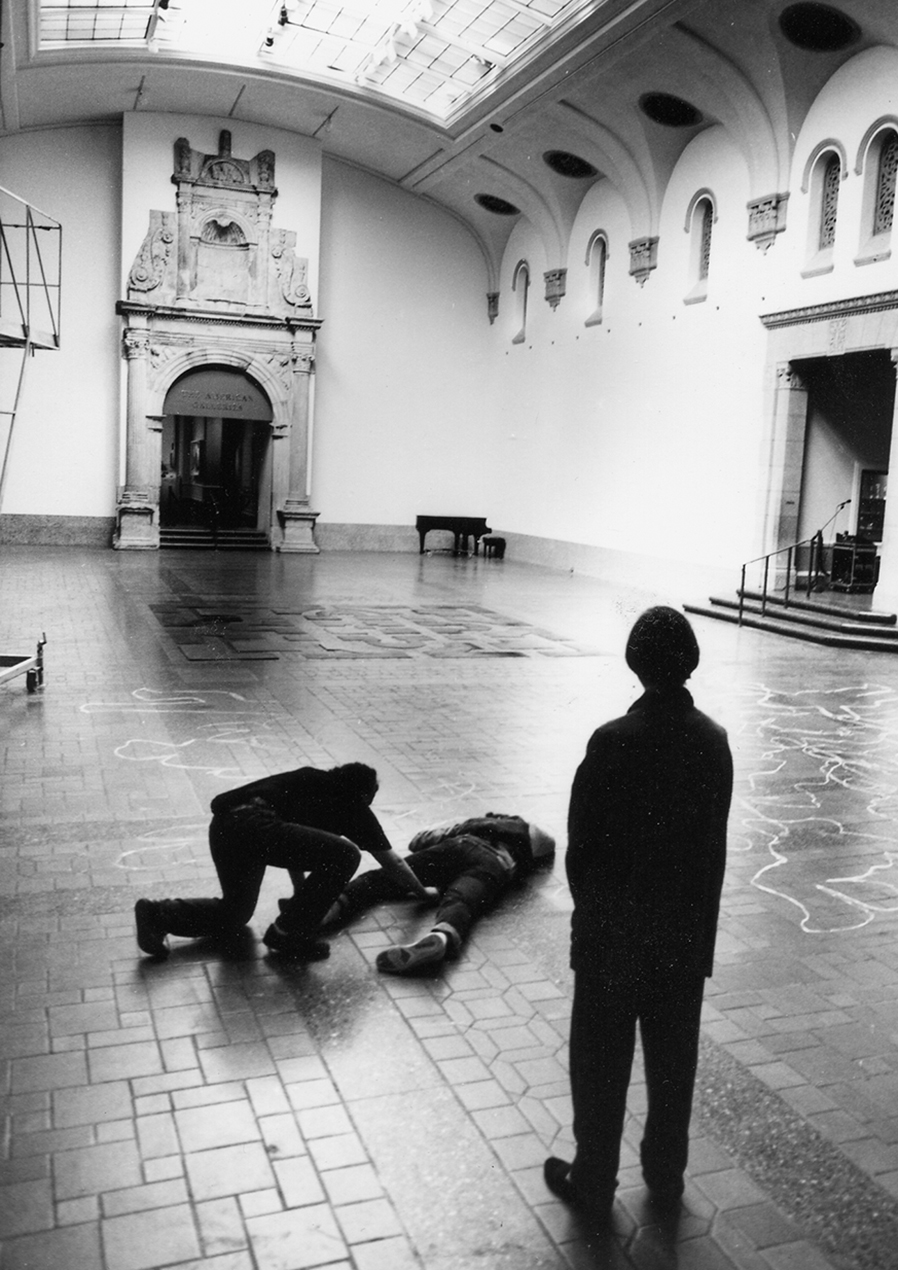 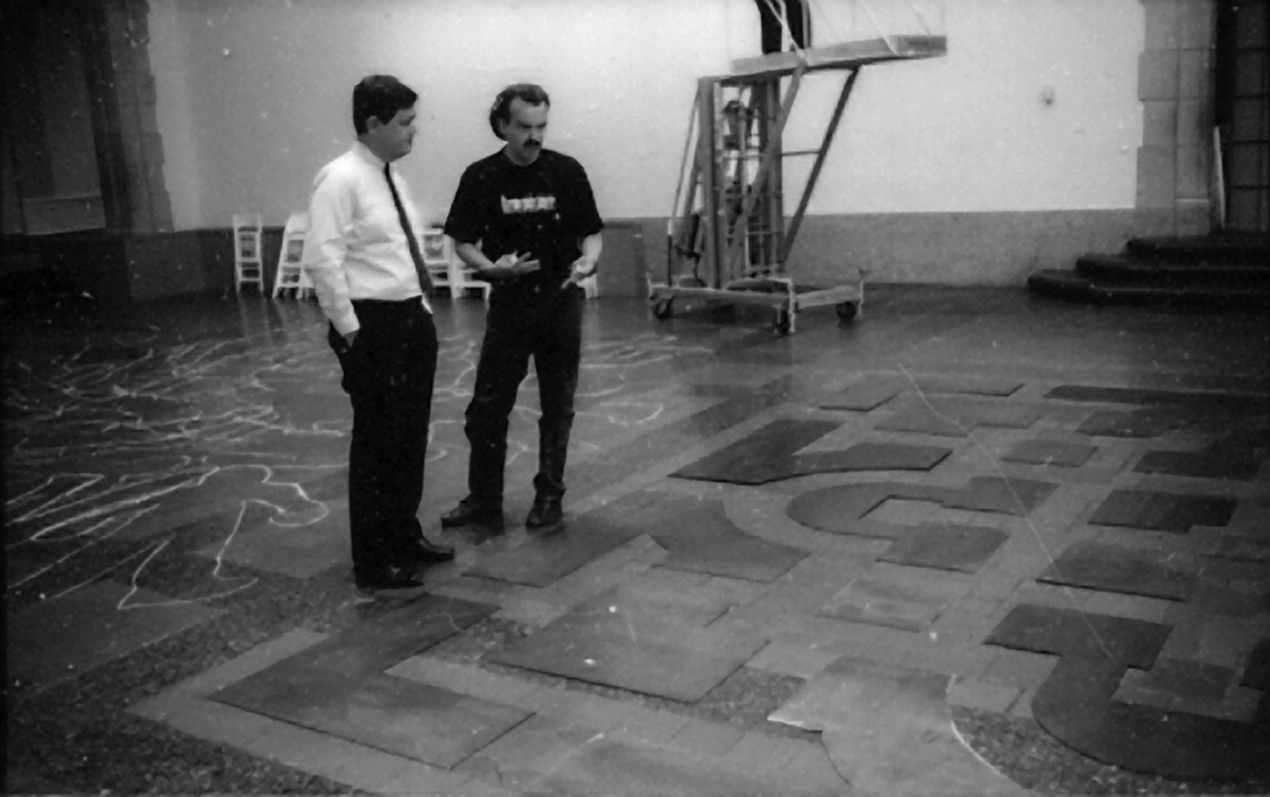 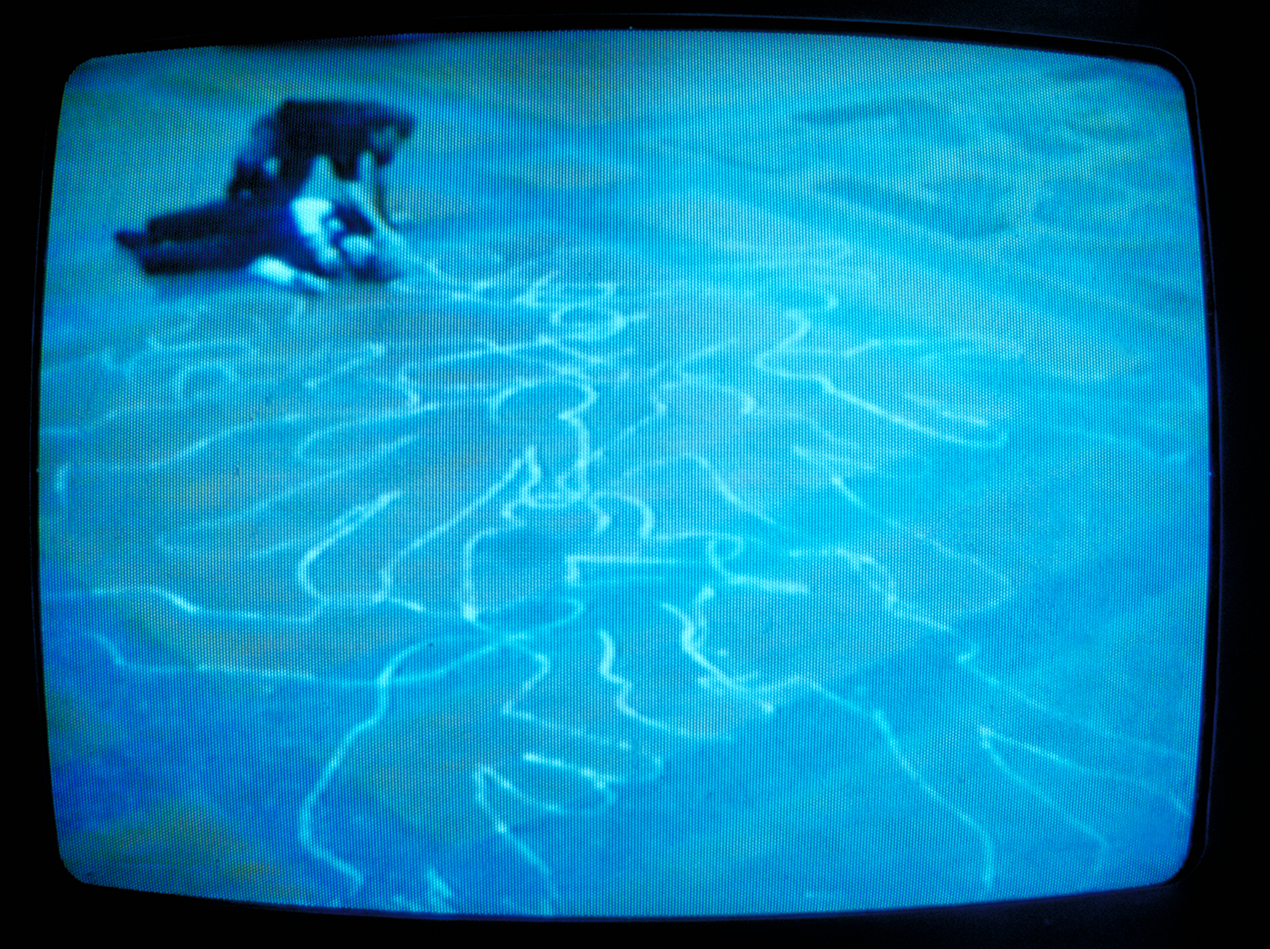 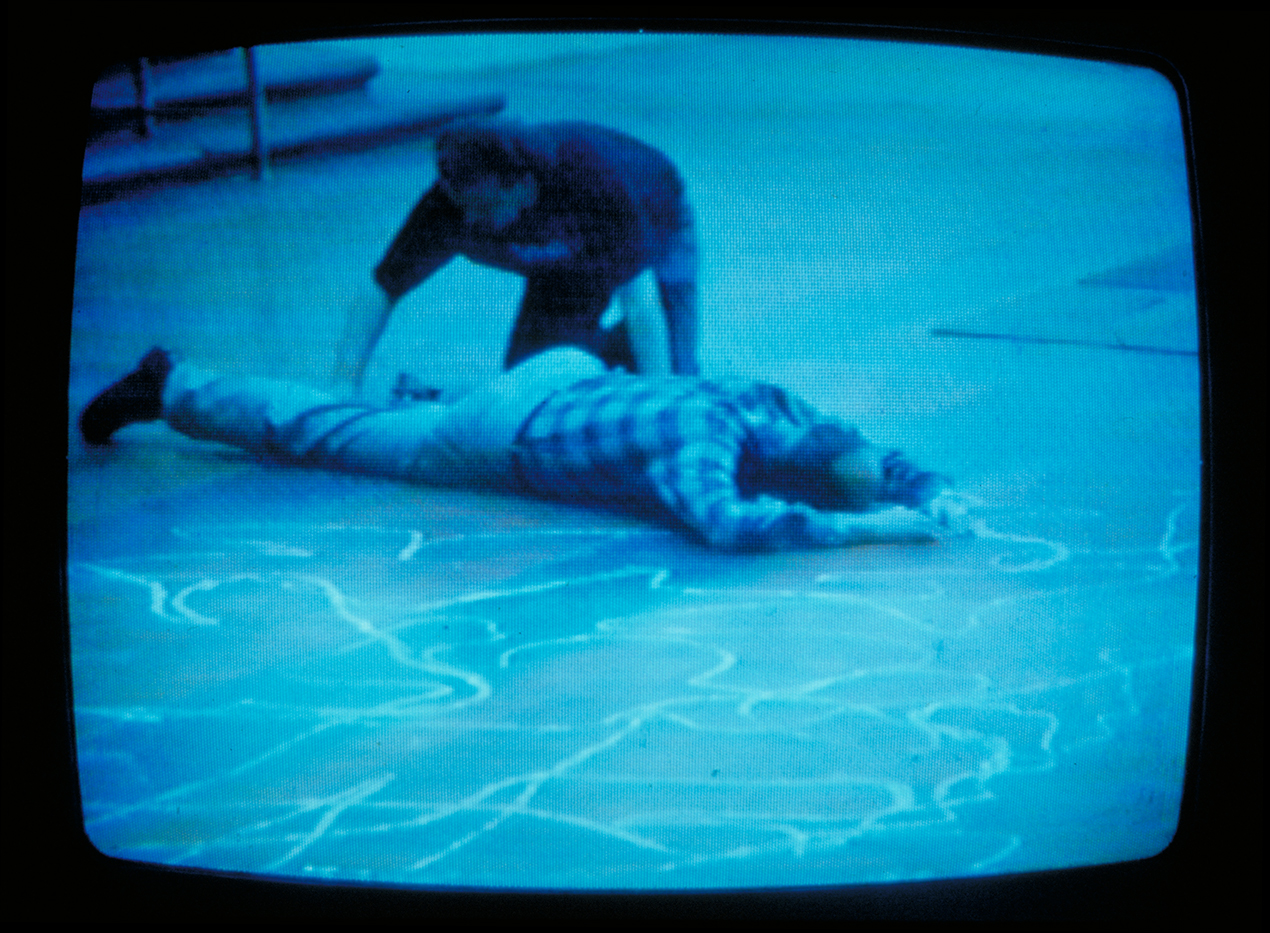 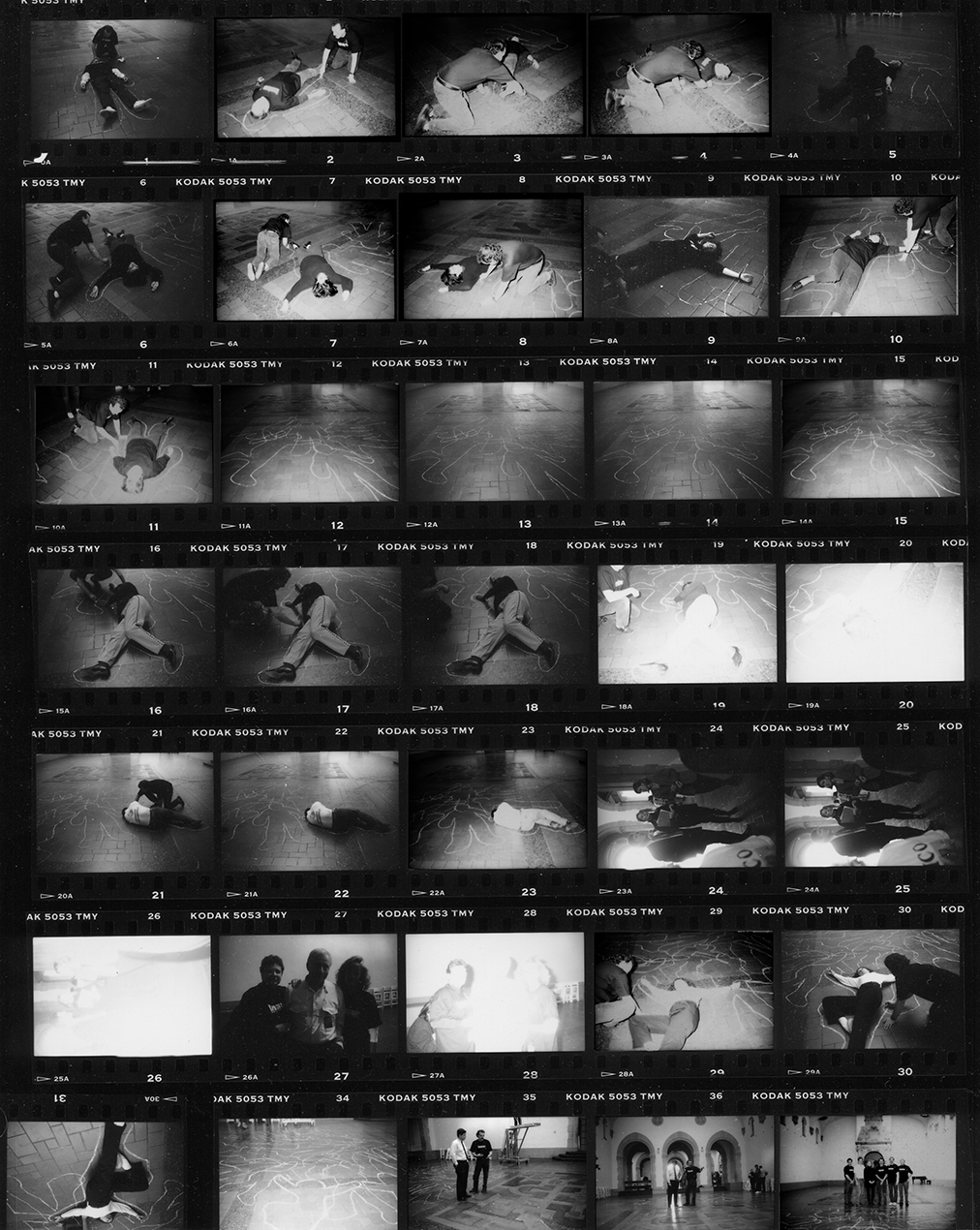 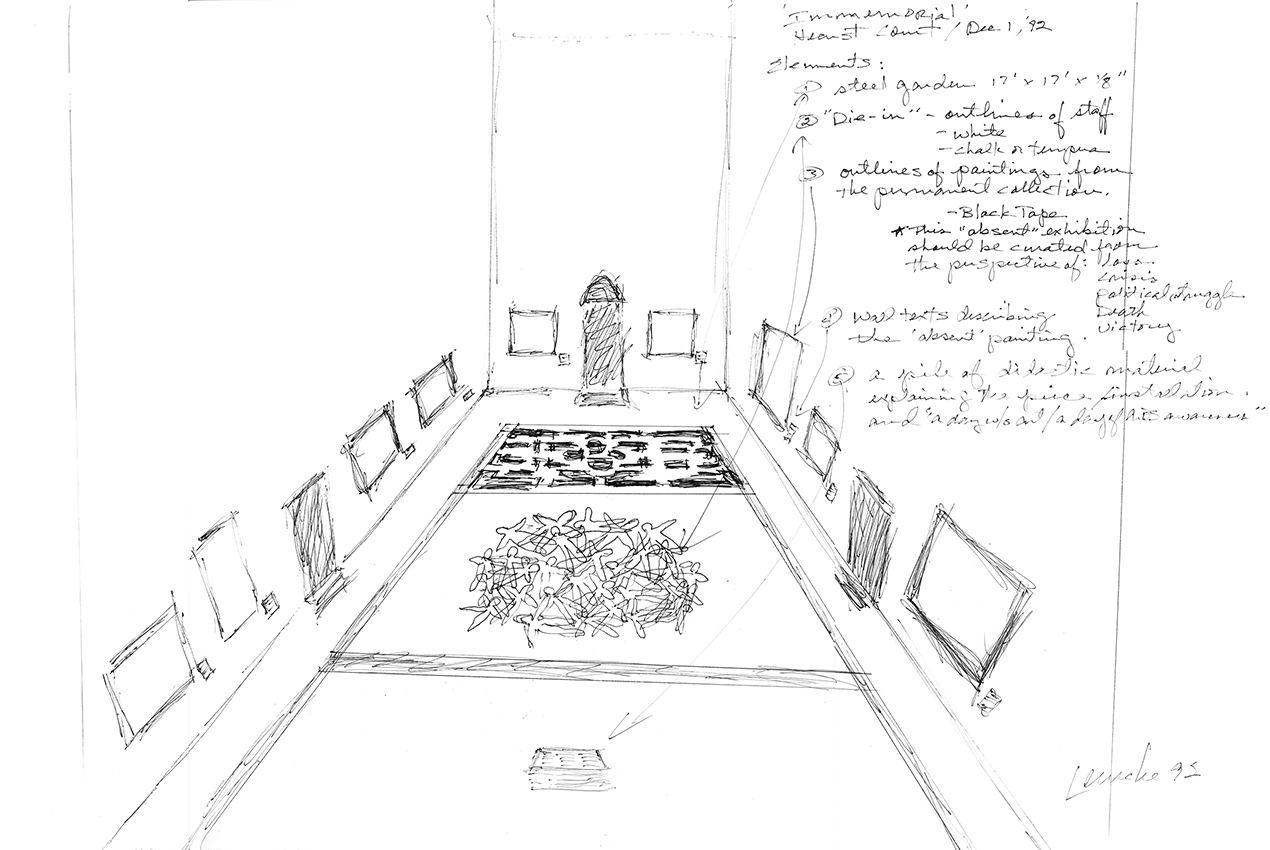 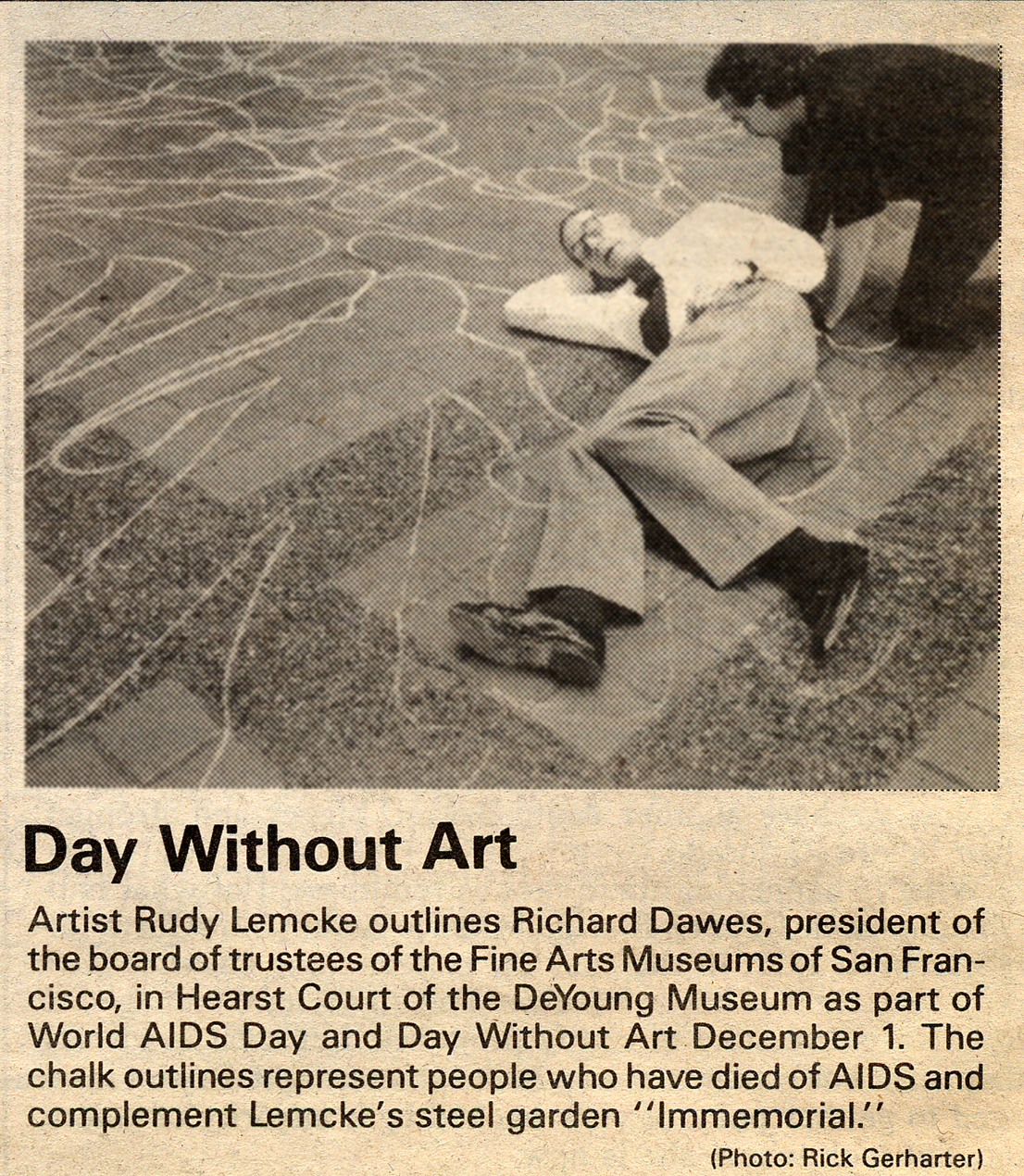