This talk was delivered as part of the Art of Activism Panel on April 6th, 2017 at the Contemporary Jewish Museum in San Francisco. The panel was organized by Gravity Goldberg and was presented in conjunction with the Cary Leibowitz exhibition.

I’d like to begin our discussion by presenting a visual narrative culled from the Art AIDS America exhibition that ended its national tour this week. Jonathan D. Katz and Rock Huska were the curators.

I’ve pulled a selection from the 200 plus pieces in the show and clustered them, not in the order that was developed by the curators, but in groupings that represent my own reading and experience of the exhibition.

The idea for presenting the work this way was partly inspired by Roland Barthes A Lover’s Discourse; in that the reading is a collection of fragmented experiences and thoughts, in this case, about AIDS, and where the core meaning is expressed as a non-linear co-creation between the reader and the text.

This first piece is called Foscarnet. Foscarnet was a drug that was used in the late 80s to treat a disease that caused blindness in people with HIV infection. 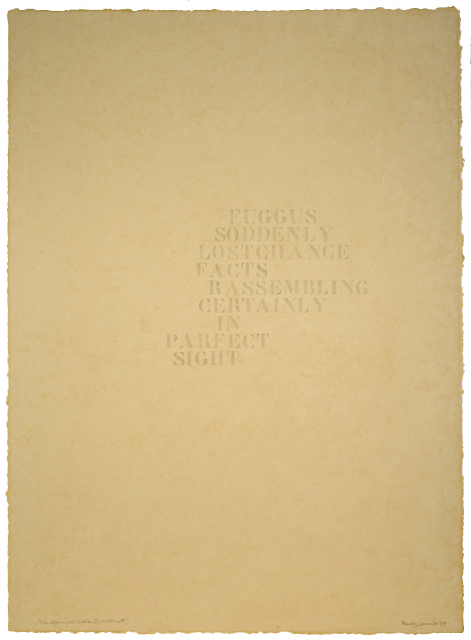 The drawing was inspired by a piece by John Cage called the 1st meeting of the Eric Satie Society. Cage used a computer program to create mesostic poems from James Joyce’s Finnegans Wake. The horizontal lines form the body of the poem with a central axis or spine that holds the text together by linking one letter from each of the horizontal lines. Cage’s piece randomly generated poems from Joyce’s text. In my series of drawings, I inserted AIDS drugs as the central axis. The random words are held together by this spine and shift the significance of the words and the poems to the world of AIDS.

This is how I read the art AIDS America exhibition, and how I look at AIDS art in general. How AIDS shifted the axis of our world.

Artists took what they were doing in their individual art practice – however abstract or conceptual – and refocused their ideas and expression through the lens of the AIDS crisis. This is the turning moment that Katz talks about in his essay on poetic postmodernism; and how AIDS changed the queer art world and the ripple effect that this had on American visual culture.

Slides of the opening day of the Art AIDS America Exhibition

Viruses are able to replicate themselves or convert other objects into copies of themselves when these objects are exposed to them.

The term viral has become a common way to describe how thoughts, information, and trends move into and through a human population.

These images employ the techniques and strategies of mass media to replicate subversive content. The work attacks its host with its own form of production.

“Use what is dominant in culture to change it quickly.” Jenny Holzer 1983

These images and objects work within the system of aesthetic and political order to involve and implicate the viewer in their construction.

Unlike agitprop, the self conscious promotion of a political ideology, the poetic postmodern object acts as an interlocutor, a presence, confronting us, asking questions about us, our feelings, our emotions, our judgements. (JDK)

We are asked to co-create and co-habitate a scene in which we are implicated.

How to do things with Words

From J.L. Austin’s famous philosophical text, How to do Things with Words, Austin points out that we use language to do things as well as to assert things, and that the utterance of a statement like “I promise to do so-and-so” is best understood as doing something — making a promise — rather than making an assertion about anything.

The Act-Up image by Gran Fury does what it says — Act-Up depicts and performs as agitation.

The Name of the Father

These images call forth the name of the father.

It is not the physical presence of the father but the symbolic role of the father as the ordering function of the image’s signification that is taking place.

The image reveals the order within which this relation is symbolically circumscribed; but in these images there is an act of reversal and re-inscription as the Son stands over the Father in judgment.

Bearing witness is sharing our experiences with others, most notably in the communication to others of traumatic experiences.

The act is a way to process an experience, to obtain empathy and support, to lighten our emotional load via sharing it with others, and to obtain catharsis.

I am not a Victim; I am a person with AIDS

These images seek to disentangle their identity with the social and scientific objectification of the disease so that the viewer can touch a shared humanity.

Message in a bottle

The use of metaphor and allegory in work about AIDS subvert stereotypical readings of illness and create new, personal narratives.

“Remember that you have to die” in Latin. 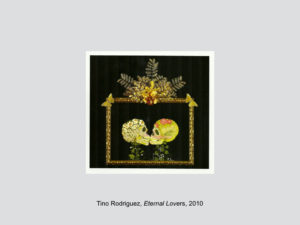 The Body, there and not
(bodily fluids and absence)

The use of bodily fluids, both literal and metaphorical, as stand-ins for a type of abjection; a primal fear of the breakdown of the self.

The site of infection, of an open wound, of oozing pus, or a corpse brings about the fear that there is no separation between objects and ourselves.

Absence. The use of the absent subject or space to symbolically represent the non-presence of another.

Missing in action. The designation for a member of an organization with whom contact is lost and whose whereabouts are not known, but whose death is not confirmed.

For me, the evolution of the exhibition over the course of its public life reinforced the idea that AIDS is not an event in history but an active part of our world that we are still struggling to articulate, represent and understand. 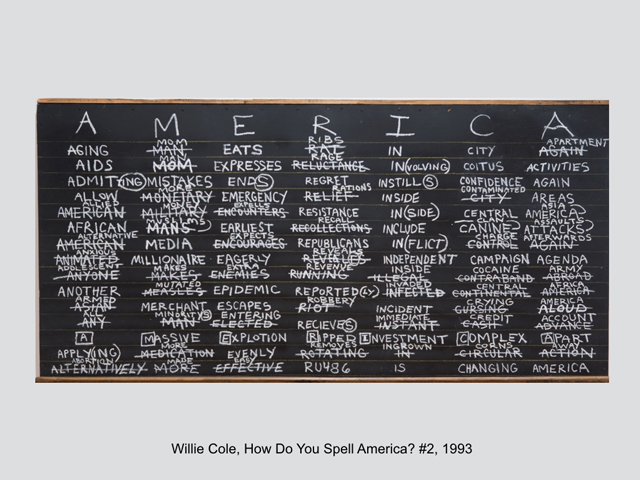